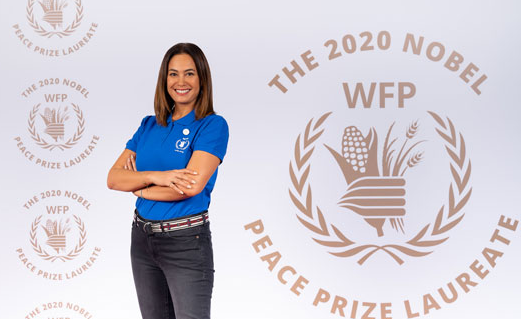 The 2020 Nobel Peace Prize was awarded to the World Food Program for its efforts to promote peace while highlighting the links between conflict and hunger. WFP sees food assistance as essential in supporting the first step towards peace and security .

Accepting her award at the World Food Programme's regional office in Cairo, star Hend Sabry said: "Congratulations to the World Food Program and to all my colleagues who have achieved this honor by working to provide a better life for people, and to give us a better world, a world without hunger. I am so proud to be part of this family ."

"Today I think of all the people I've met who work with WFP, whether in refugee camps, or in WFP offices in the many countries I've visited. This award is for all of us, especially for the men and women who chose to serve those in need 24 hours a day." daily, and also for all those who deliver food every day by land, sea and air .”

Every day, the World Food Program moves up to 5,600 trucks, 30 ships and 100 aircraft, to get food and other assistance to more than 115 million people in more than 80 countries. .

In the Middle East and North Africa, the World Food Program operates in 13 countries and in some of the world's most difficult regions due to ongoing conflict as well as protracted mass displacement. The program aims to support more than 30 million people in the region this year .

Of the 6 global emergencies implemented by the World Food Programme, two are located in the Middle East, in Syria and Yemen, where nearly 18 million people - 13 million of whom suffer from hunger in Yemen and nearly 5 million in Syria - depend on WFP food assistance. global survival .

Hend Sabry added: “When I started working with the World Food Program many years ago, the region was different, and I never thought we would experience this much need, sadness and loss that we have seen over the past years. I hope that one day no one will have to worry about their meal As a WFP Goodwill Ambassador for the Middle East and North Africa for over 12 years now, I feel very proud to be part of this family .”

It should be noted that the multi-award winning artist was appointed as a WFP Goodwill Ambassador in 2010. Prior to her appointment and throughout her tenure with the programme, she visited WFP operations in Egypt, Tunisia, Jordan, Lebanon, Palestine, Syria and Bangladesh .

“Hind Sabri has been and continues to be the voice of the voiceless across the region and beyond, the people who struggle every day in silence to confront hunger and conflict,” said Corinne Fleischer, WFP Regional Director for the Middle East and North Africa. She added: “WFP’s 20,000 employees are celebrating the Nobel Peace Prize, and many of them are working on the front lines of the struggle to tackle hunger. It is a special moment for the WFP family. Hind is one of them and we are honored to share this recognition .” "

Keen to pass on her human experience and values ​​to her two daughters, Hend Sabry said that both are passionate about her role in humanitarian work: “I tell them about my work with the World Food Program, my visits to refugee camps and WFP projects around the world. I teach them that hunger is not separate from ignorance, And it is not separate from war or all the negative things that happen in the world .”

The certificate awarded to star Hend Sabry bears the signature of David Beasley, Executive Director of the World Food Programme, who received the award on behalf of the program and its staff in an online virtual ceremony due to the restrictions imposed by the Corona Virus (Covid-19) pandemic .

The United Nations World Food Program is the 2020 Nobel Peace Prize Laureate. It is the world's largest humanitarian organization that saves lives in emergencies and uses food assistance to pave the way toward peace, stability and prosperity for people recovering from conflict, disaster and the effects of climate change .