On a Phone.. The President of Ukraine Addresses His People From Under The Bombardment

The morning after the Russian missile barrage on the Ukrainian capital, President Volodymyr Zelensky addressed the people in his favorite style via video clip.

During the "selfie" clip, Zelensky worked hard to draw a smile on his face, while he appeared unshaven and wearing a military jacket, and assured his compatriots that he was still among them in the capital and denied the authenticity of reports that he tried to escape.

In a live broadcast on the social networking site Instagram, which garnered three million views in the first hour, Zelensky said, "Good morning all Ukrainians! Recently, a lot of false information has been reported on the Internet that I have called on our army to lay down their weapons and leave. Hear me. I'm here. ".

During the broadcast, Zelensky appeared standing in the morning sun on the other side of the road in front of his office in Kiev, with the famous "House with Chemeras" teacher behind him. 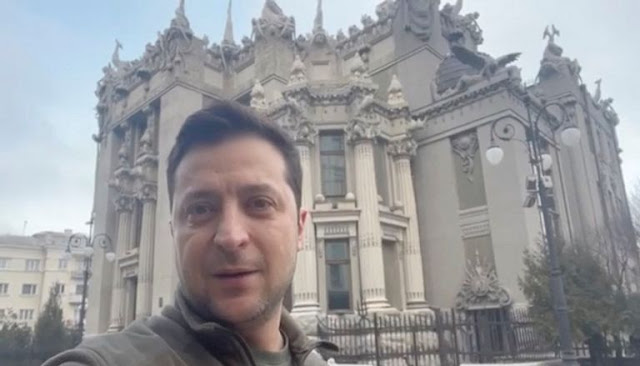 During the recording, Zelensky vowed not to lay down arms in the face of the successive Russian strikes on his country, accusing Russia of inciting rumors, again saying: "We will not surrender."

He said he had spoken with French President Emmanuel Macron, adding: "Weapons and equipment from our partners are on the way to Ukraine."

And he called earlier today, Saturday, for the necessity of stopping this war immediately, noting that his country's army "is steadfast until the moment," and added, "We need military aid."