Koko's Final Remarks Before Passing Away

The well-known gorilla Coco According to the charges, he "sends her last message to humanity before she dies" in the video, and based on what social media users have been spreading for years, "these are her dying words." But this assertion is false. In fact, Coco was seen signing in a video that was uploaded in December 2015, which was around three years before she passed away. It was communicating with the nations taking part in the Paris climate summit.

Fact: The video lasts for 1.06 seconds. The English translations that go with the video depict a gorilla signing, "I'm a gorilla, I'm flowers, and animals..." Allegations that certain images depict "the gorilla Koko conveying her last message (or words) to humans before her death" have been making the rounds in the media for years.

Review: Koko might be "She is the most well-known gorilla in the world because to her creative talent, her use of sign language, her interactions with kittens, and the media's fascination in her from an early age. She is not the only gorilla, though, who is skilled in the arts and sign language "according to the Gorilla Foundation's definition (Here).

On July 4, 1971, Coco was born at the San Francisco Zoo in the United States. Additionally, when she was a little child, her mother refused to take care of her and other people had to take care of her upbringing. Benny Patterson, a "young graduate psychology student at Stanford University, who consented to sponsor Koko for a few years and was permitted to teach her sign language, constituting the subject of her PhD thesis in developmental psychology at Stanford," is one of her sponsors.

The Coco Project began with this meeting between Patterson and Coco. It was something Patterson did not anticipate: "This strong emotional relationship with Koko developed, so that what began as a 4-year commitment became a 4-decade relationship that changed the world's perception of the gorilla, from being a huge and fearsome beast to a sensitive and sympathetic being very similar to humans.

Just two weeks before her 47th birthday, Koko passed away "in her sleep" on June 18, 2018, at the Gorilla Foundation's Sanctuary in the Santa Cruz Mountains of California. "She had a life filled of love, and millions of people around the world mourned her.

Realism of the video: Did Coco really offer her "her final message or words before she dies," as claimed in the circulating clip?

In truth, this film was broadcast on the Gorilla Foundation website (Here) in December 2015 with the justification that Coco "has been given a chance to represent the "Voice of Nature" at the COP21 Climate Summit in Paris on January 1 by NOE, a non-profit organisation with its headquarters in France. First is 2015 through the eleventh of it.

On December 1, 2015, NOE uploaded a video of Coco on its YouTube channel "At the COP21 Climate Summit, Koko the Gorilla represents nature.

The statement "Coco has a message for the countries participating in the COP21 summit" is made very explicit at the opening of the video. 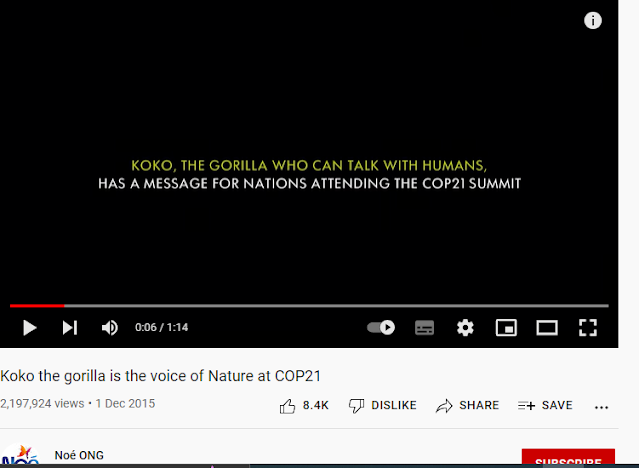 According to the Gorilla Foundation, the "NOE wrote the text of the statement that Koko submitted to the summit. In a series of quick daily video discussions, we also gave Koko the freedom to improvise, forcing her to pick up new cues like "defend" and "nature.""

For brevity and continuity, the final version of the video (above) was created "from a number of distinct segments." The fundamental message, though, was crystal plain to Koko: man is harming the earth and the numerous species of animals and plants on it and needs to "hurry" to address the issue.

What did Coco say in her speech to the 2015 Climate Summit in sign language?

I am a gorilla, I am flowers, animals, and nature, she claimed in an English translation of the letter, as reported by the Gorilla Foundation. Coco adores males. Coco adores the planet Earth. But man is a foolish animal. Coco is crying and apologises. Time to move quickly. Help the earth by repairing it. Be quick! Defend the planet. Nature is a buildup. Thanks.

Later, audio was added to Coco's video by the Gorilla Foundation, translating what she was saying.

According to the charity, Coco's video has received "more than 30 million views, since the 2015 summit." Approximately three years before her passing in 2018, it was published in 2015.

The Gorilla Foundation released a number of videos showing Coco performing between 2015 and 2018 , accepting a book as a gift, playing the guitar, or creating artwork.

As a result, it is untrue that the widely-disseminated video depicts the gorilla Koko "sending her last message to humanity before she dies." In actuality, the video was created on December 1, 2015, or around three years before she passed away. It was conveying a message to the nations taking part in the Paris climate summit at the time.