On all Android Smartphones, How to Take a lengthy Screenshot

You may need to take more images or screenshots if the screenshot you take on your phone is insufficient to show everything you want to save. Most recent phones have a useful feature called Long Screenshot, also known as Scrolling Screenshot, which allows you to take a long screenshot and capture the entire contents of a long page as a single image.

With our detailed instructions, taking lengthy screenshots on Android is simple. Continue reading to see how to accomplish this on any Android phone.

On Android devices, how do you snap a screenshot?

In the area of technology, taking a screenshot is a well-known procedure. On more recent smartphones, you can quickly switch between them by simultaneously pressing the power and volume down buttons. You can use the Volume Down and Power keys on older smartphones. As an alternative, you can press and hold the power button while choosing the screenshot option or by using a shortcut in the notifications box.

Your device will briefly flash and make a sound like a camera is shooting while the screenshot is being taken. The majority of the time, your smartphone will notify you that a screenshot has been taken by displaying a notification. Google Assistant is a built-in feature on several smartphones. It allows you to start a screenshot with a voice command. It must be activated before you can say "Take Screenshot."

It can be difficult to capture a lengthy conversation or an entire essay. It will take time and effort for you to paste every photo together. The scrolling screenshots start to appear. You can navigate through the full page with them before taking a screenshot. You won't ever have to organise screenshots into groups again.

Many manufacturers today, including Samsung, LG, and Huawei, incorporate the feature into their smartphones. A user initially questioned Google about its implementation. Google initially rejected the concept, but they persisted and eventually came up with the option.

Using one of the Xiaomi, Redmi, or Poco phones, you can snap a lengthy or longer screenshot thanks to this feature that is also available on Xiaomi phones. The process is straightforward:

Simply use one of the well-known techniques to take a screenshot, then click the "Scroll" button that appears at the top of the screen.

You must activate it in order to snap a screenshot of your Samsung's display. You must access " Settings " and look for " Advanced Features ". Enable Smart Capture by scrolling to it. You will then start taking a screenshot. There will be a scroll capture option. To finish the shot, click on it and navigate to the desired location. 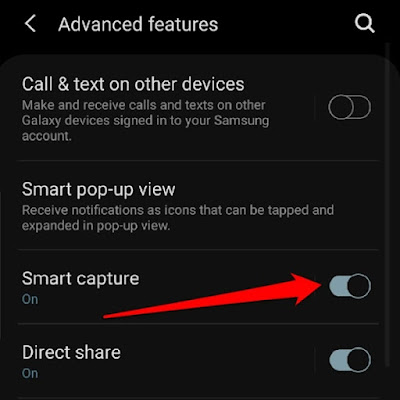 Open the screen you wish to snap a screenshot of on your Huawei device while holding down the Volume Down and Power buttons. The process should be finished when an animation appears. After that, you must select the Scrollshot option at the bottom. Scrolling downward will initiate the animation. The scrolling photo will cease when you tap on it once at the location where you wish it to end. You should see the completed image on the screen, where you can edit, share, or remove it.

outside applications to capture lengthy screenshots

You can always utilise third-party software if your phone doesn't offer a scrollshot option. There are many apps available in the Google Play Store.

With the help of the programme Longshot, you may quickly snap a screenshot of a very huge image. You don't have to worry about those bothersome elements because the software doesn't add watermarks to your photos. Although there are some advertising, they are not at all bothersome. You may experience without advertisements by paying $2.

You must first install the app from the Google Play Store before using it. Open the app, then select the auto-scroll checkbox. You may use the Longshot app by going to your settings, selecting accessibility, and then selecting installed services.

Turn the button to "On" and select "OK" to grant the necessary permissions. The blue button, which is close to the Capture Screenshot option, should then be clicked.

You will be prompted to grant your app permission to stack on top of other apps. Toggle Obtain authorization. When the software wishes to capture what is on the screen, a notification should appear to let the user know. Click the Start Now button to start recording the screen again.

Two coloured alternatives will be displayed. The starting of the recording will be written in green at the beginning. Recording will end when a red area with the word "Cancel" appears. The page you wish to record should load before you select the start option. Select Start.

You should see a red line that indicates what is being recorded. Tap on the floating item Done after scrolling to the command topic's conclusion. The screenshot can then be edited. By selecting the also keep original screenshots check box before saving, you can preserve the original screenshot.

After finishing your edits, click Save. The final product's image will show up on the screen. There are three alternatives available for you to select from. You can use the Browse menu item to access the Longshot folder, give the programme a rating, or press the New button to snap another screenshot.